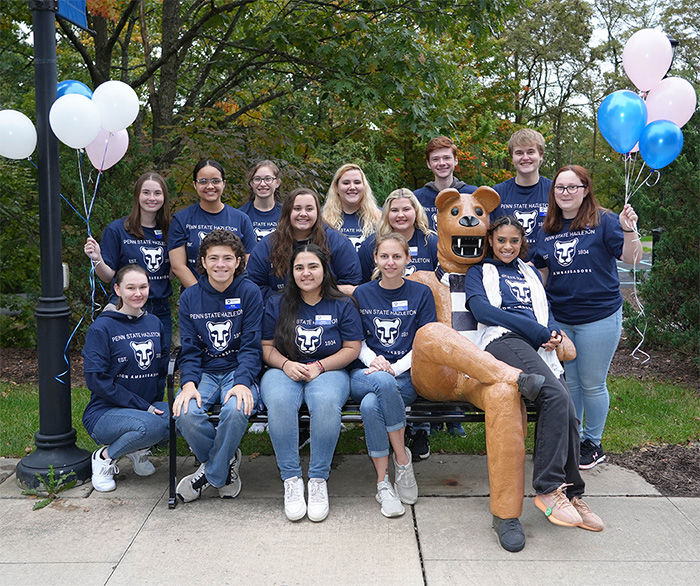 The Penn State Hazleton Lion Ambassadors have been named students of the month for September.

The Lion Ambassadors were nominated for their devotion and exceptional work to help Penn State Hazleton provide campus tours to prospective students and their families, according to their nominator.

“In many ways, these students are the face of our campus and devote a great deal of their time and energy to the job,” their nominator wrote.

The Lion Ambassadors are a chosen group of outstanding students who, as a club, promote Penn State and its interests and goals among current and future students, alumni, and friends.

The Lion Ambassadors said they were grateful and honored to learn they had been named students of the month because it shows how much hard work they put in for prospective students and their families.

“Being one of the student representatives for our campus and being able to share my own Penn State story with families to convince them to choose Penn State has helped me grow as a student and as a person,” Janson said.

Tori Fox, a sophomore from Hazleton majoring in physical therapist assistant and rehabilitation and human services, has been named Penn State Hazleton’s student of the month for October.

Fox was nominated for her civility, community care and involvement. According to her nominator, she has leadership, guidance, involvement, dedication, creativity, and resilience as a member of the Penn State Hazleton campus community.

Fox volunteers as a Lion Ambassador, providing campus tours to prospective students and their families. She is also a member of the Campus Activity Board and Exercise is Medicine. Outside of Penn State Hazleton, she works part time at a local grocery in customer service.

Fox said she feels extremely grateful knowing that her hard work, commitment, and dedication is being recognized and appreciated.

“This award shows me that everything I am doing on campus is truly appreciated by staff and my professors,” she said.

Fox is a graduate of Hazleton Area High School.