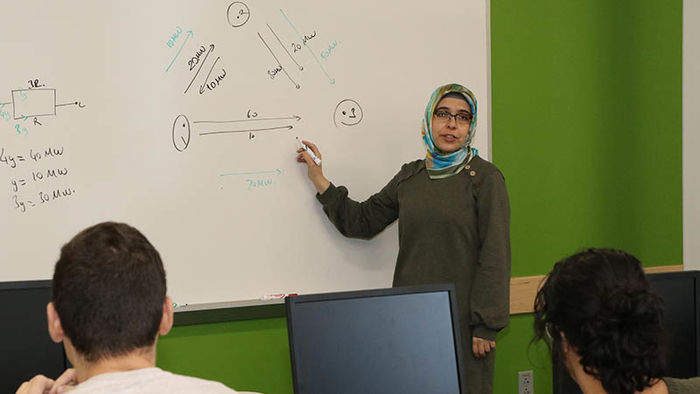 Just as throwing a stone into a lake creates a ripple effect, creating a solar energy system can have a significant impact on energy supply and prices in big multi-state regions, according to a Penn State Hazleton faculty member whose research focuses on renewable energy.

Mesude Bayrakci-Boz, an assistant teaching professor of engineering, said that the addition of a large-scale photovoltaic (PV) system will affect nearby areas “very significantly” and even far away will have an impact and create excess energy supply. “What I did was look at how we can analyze these effects economically and how they’re going to change electricity prices in the region.”

Through her research studies, Bayrakci-Boz has examined how solar energy production could affect electricity supply in a region known as PJM Interconnection zones. The region consists of Pennsylvania, 12 other states in the Northeast, Midwest, and South, and the District of Columbia.

“The issue is that solar energy is not producing all day,” said Bayrakci-Boz. “It’s going to fluctuate a lot. It’s not constant power, so that’s going to affect how the grid works.”

In this region, the movement of electricity is coordinated by a regional transmission organization (RTO) called PJM Interconnection. If PJM managers or managers of other electrical grids anticipate that solar energy going to produce 10 megawatts of electricity an hour, and it doesn’t, “it’s going to cause problems, technically and economically.”

In a forthcoming study, Bayrakci-Boz will classify and assess the use of Virginia Department of Transportation sites or infrastructure for the use of solar PV systems, in order to facilitate informed planning and decision-making processes.

Bayrakci-Boz’s research could help potential PV system developers — investors, communities, or private businesses — answer the complicated questions related to that fluctuating energy supply. For instance: How many PV panels should we install, and where? What direction should they face and how much should they tilt from the horizontal? How much energy will they produce at peak hours? What do we do with the excess energy we’ll probably produce during the day? What do we do when the PV system is not producing enough energy to meet our customers’ needs? Can we sell excess energy to other states that need it? Do we need to invest in batteries to store excess energy?

Bayrakci-Boz hopes that her research helps pave the way to a clean energy future. “The sun has enough energy to provide more than our current energy use,” she said, “and research is going on [to determine] how we can use this potential in an efficient way and make it more economical.”

In addition to her research, Bayrakci-Boz has mentored undergraduate students studying energy engineering in independent research and honors theses at Penn State, and has helped students prepare their projects for research fairs at Penn State Hazleton. Her research also filters into her classes in engineering mechanics, nuclear engineering, energy-related software, and engineering design, where she helps students address real-world issues and challenges.

“Whatever class I am teaching, I always give examples of a project from real life,” she said. For example, Bayrakci-Boz will point her students to websites run by the U.S. Energy Information Administration, the National Renewable Energy Laboratory, the National Oceanic and Atmospheric Administration’s (NOAA) National Center for Environmental Information, and NOAA’s Earth System Research Laboratory.

“They go to the web pages, they download real data, and they run the analysis,” she said. “I am not giving them any hypotheticals. I want them to be ready as possible when they graduate, because when they graduate they are going to look for jobs, and in real life, they need to know the resources they may use.”

A new undergraduate course developed by Bayrakci-Boz, on U.S. energy market and policy, provides an overview of electricity markets, renewable energy integration, and main energy policy policies shaping U.S. electricity markets. Bayrakci-Boz called it a “perfect fit” for students’ professional lives after graduation. First offered last spring as an elective course, it will be offered again in response to students’ high interest in the course.

“I am very glad I graduated from Penn State, because I had the chance to take very different classes” — including engineering, materials science, and economics, said Bayrakci-Boz. By taking different classes and combining them, she was able to get a better understanding of renewable energy. “I had a chance to look at [the discipline] from different perspectives, and it was very amazing for me to do that.” 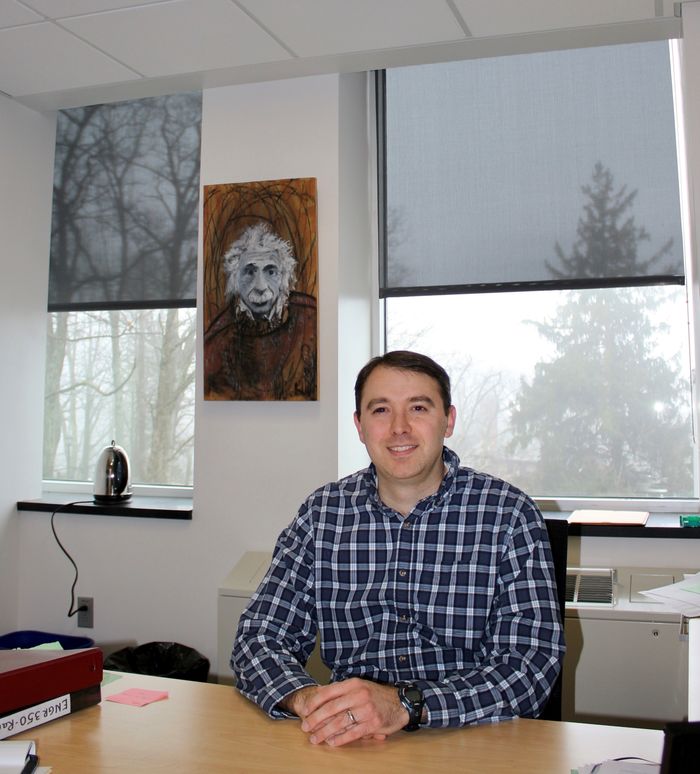 After a six-month sabbatical at a German university and research center, an associate professor of engineering at Penn State Hazleton came back impressed by Germany’s leadership in renewable energy and committed to doing everything he can to help renewable energy play a bigger role in meeting U.S. energy needs.

Joe Ranalli, coordinator of Hazleton’s alternative energy and power generation engineering program, was working with the German Aerospace Center’s Institute for Networked Energy Systems through its connection with the Carl von Ossietzky University of Oldenburg, in the German state of Lower Saxony. While Lower Saxony has about 8 million residents, compared to Pennsylvania’s 13 million, and receives comparable sunlight to Alaska, where there’s far less sunlight, it has 10 times as much installed solar capacity as Pennsylvania does — 3,500 megawatts, compared to Pennsylvania’s 350 megawatts.

“There they are, way up to the north of us, and they have 10 times as much solar capacity, despite having fewer people, and despite Pennsylvania’s solar resource being 25 percent better than theirs,” Ranalli said. “It really shows you that we’re lagging way behind.”

Ranalli’s overarching goal is to do research that will help make clean, environmentally friendly renewable energy a bigger part of the U.S. energy mix.

“If you want a future where renewable energy plays a much bigger part of our energy mix, we need technologies to pave the way,” he said.

The University of Oldenburg specializes in interdisciplinary and sustainable development studies and renewable energy studies with a focus on solar and wind energy. The German Aerospace Center does extensive research into aeronautics, space, energy, and other areas.

With researchers who focused on energy meteorology, Ranalli worked on a number of important projects:

Combining the findings from these projects — that is, using the “irradiance” data in conjunction with the information on the location of the PV systems — could enable a transmission or power plant operator to forecast what the solar power generation could look like during a specific time period in a specific geographic area, Ranalli noted.

“If you’re a grid operator, you need to be prepared,” he said. “If you know that there’s clouds coming in, and you know these clouds are going to be over a 10-megawatt solar plant, you can plan dispatchable power from a reserve power plant that’s going to come on to make up for the shortfall from the solar.”

As a teacher, and as coordinator of the alternative energy and power generation engineering program, Ranalli’s major goals are to help prepare multidisciplinary engineers who will be sought after by area engineering firms and the renewable energy industry.

Students in the alternative energy and power generation program — offered only at Penn State Hazleton — learn a mix of mechanical, electrical and chemical engineering.

“They have to learn aspects of all three to be able to understand alternative energy systems,” Ranalli said.

Ranalli also strives to engage students in real-world projects with area companies and agencies, as part of the “capstone” courses that come at the end of a Hazleton engineering major’s education.

“When you get a good partner and you get a good project, it really makes for a great opportunity and a great experience for the students to cap off their undergraduate degree in a really cool way,” he said.

As a student in Penn State’s Schreyer Honors College, Ranalli was able to do undergraduate research — and as a Penn State faculty member he tries to provide that same opportunity to Hazleton students.

“All Penn State education is excellent, but undergraduate research really showed that to me in a special way,” Ranalli said. “And that is part of why I wanted to be a teacher here, because I love learning and I want to pass that on to my students.”

Bachelor of Science in Engineering

Tune in and discover the opportunities available at our campus!