HAZLETON, Pa. — A scholarship in honor of the late Matthew Gibson has been established at Penn State Hazleton by his parents, Paul and Lori Gibson.

The Matthew Gibson Memorial Scholarship will provide financial support to assist full-time undergraduate students in their first or second year who are interested in pursuing their education in the field of chemistry. Gibson, a senior at Stroudsburg High School, had been accepted to Penn State Hazleton and planned to study chemistry. He passed away Jan. 8, 2015.

Matthew was in the top 10 percent of his class, was a member of the National Honor Society and earned high honor roll all through high school. He was active in Boy Scouts of America since first grade, achieving the rank of Eagle Scout in June 2014.

“Matthew had a strong passion for chemistry that began as a young child,” Lori Gibson said. “At age 5, he was performing simple experiments. For birthdays and holidays, he always requested chemistry equipment. He always aspired to be a medical research chemist. He wanted to make a difference in this world. He wanted to find cures for diseases, research new medicines and benefit the medical welfare of the community.”

Assistant Professor of Chemistry Dan Patel met Gibson while he was considering furthering his education at Penn State Hazleton.

“Matthew was one of those people who makes me glad to be a teacher and I was very much looking forward to him starting his undergraduate studies at Hazleton. I could tell that he was passionate about both chemistry and the path that lay ahead of him as he started his studies,” Patel said.

“All chemists are a huge worldwide family; having a named scholarship like this reminds us of that.  Perhaps more importantly, it helps to foster continued growth of the field by encouraging talented young students to pursue studies in chemistry and attracting those who might not have considered a career in chemistry.”

Gifts from Penn State’s alumni and friends have been essential to the success of the University’s historic land-grant mission to serve the public good. To fulfill that mission for a new era of rapid change and global connections, the University has begun “A Greater Penn State for 21st Century Excellence,” a fast-paced campaign focused on the three key imperatives of a public university. Private support will keep the door to higher education open and enable students to graduate on time and on track to success; create transformative experiences on Penn State campuses and around the globe that tap the full potential of Penn Staters to make a difference; and impact the world through discovery, innovation and entrepreneurship. To learn more, visit greaterpennstate.psu.edu.

“When the Gibson family approached us about creating a scholarship in Matthew’s memory, we wanted to help ensure that other deserving students would be able to pursue a field they were passionate about, like Matthew was with chemistry,” said Eileen Kuperavage, director of development at the Hazleton campus. “We are grateful his family chose this way to establish his legacy at Penn State Hazleton.”

“Not only was he the smartest person I ever knew, he was also very caring,” Lori Gibson said. “Not until after he passed did we find out how he helped others. We found out that he gave a friend money to help his parents from getting the electricity shut off. He was the most humble of young men. He never sought praise for his good deeds, enjoying staying in the background instead. I know he would be thrilled to give an opportunity to another passionate student.”

To learn about giving opportunities and current matching programs for endowments, contact Kuperavage at 570-450-3175. 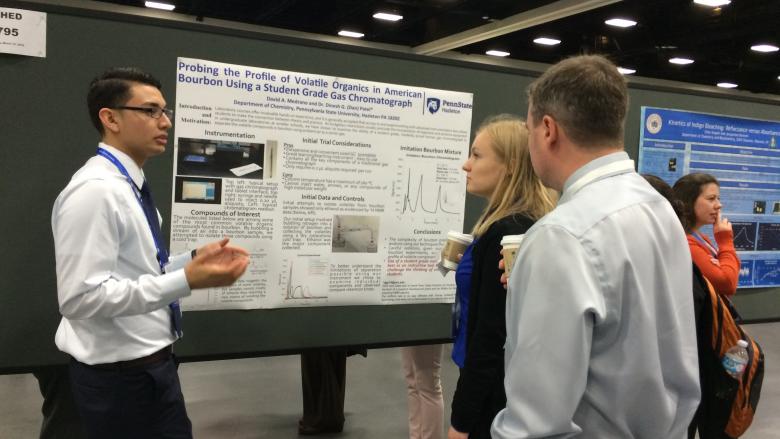