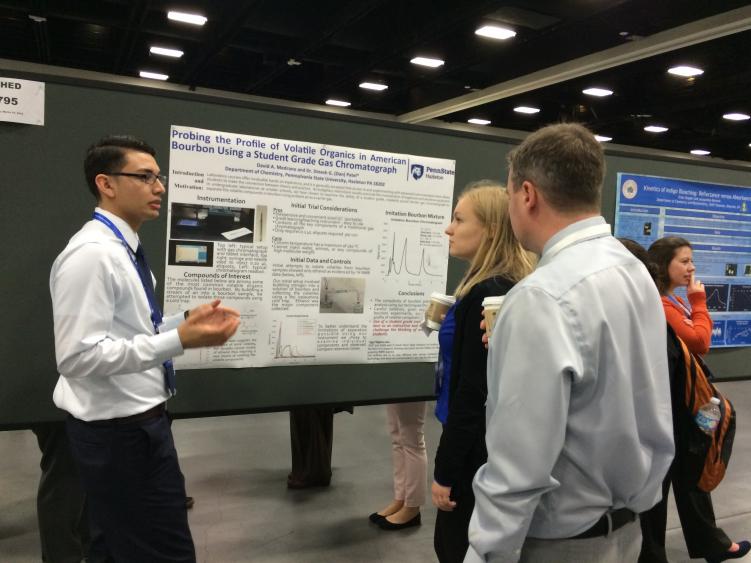 David Medrano discusses his research and poster, which was one selected from among thousands of entries for the 251st ACS National Meeting in San Diego, California.

HAZLETON, Pa. — A Penn State Hazleton student and his professor are in California presenting at the American Chemical Society’s annual meeting.

David Medrano is presenting his poster titled “Probing the Profile of Volatile Organics in American Bourbon Using a Student Grade Gas Chromatograph,” which he researched and developed under the guidance of Dinesh (Dan) Patel, assistant professor of chemistry. Medrano’s poster was one selected from among thousands of entries for the 251st ACS National Meeting in San Diego, California, from March 13-17. He is presenting his poster and answering questions from faculty members and undergraduates from other schools.

The poster summarizes the research Medrano has done using a gas chromatograph, testing how the student-grade instrument can be used in other student-led applications.

“One of the main purposes is being able to use and gain knowledge of how a gas chromatograph works,” Medrano said. “Laboratory courses, which offer hands-on experiences unavailable in lecture courses, are invaluable to undergraduate students, especially in the sciences. Using a student-grade instrument is much less expensive than what you see at a graduate school. Being able to use this for more projects would be helpful for graduate students or smaller laboratories so that students could still do research without the more expensive equipment being required."

His project focuses on using the gas chromatograph to separate the volatile chemical compounds found in bourbon, a common platform for chemistry experiments due to the number of compounds (more than 200) that are found in bourbon and can be isolated.

Medrano developed the idea after Patel told him the chemistry department had ordered two gas chromatographs for future laboratory experiments and the pair looked through academic publications to see what research could be conducted with such an instrument.

“I met David as a student in my chemistry courses, when he changed his major to chemistry from the forensics chemistry major he started as. I thought it was really important for him to gain experience working in a laboratory. I suggested he do a research project and he has worked largely on his own, learning a great deal about how to use this instrument and seeing how far we can push its limits. When he gets to University Park, he’ll be light years ahead of his peers in terms of research,” Patel said. He said Medrano will write a piece for the Journal of Chemical Education about his research.

“I’m a firm believer in giving my students a leg up in their futures and careers. This conference is the perfect opportunity for David to speak to faculty at institutions he may consider for graduate school and to make connections with others in the chemistry field,” Patel said.

He said ACS selects students based on the research they have done and how it is beneficial to chemistry education. “They are looking for real science that is unique, not simply a book report or review of the literature,” he explained.

Among those possibilities, he noted, is the close working relationship he has developed with Patel.

“Since I knew the field I was entering required a lot of study and preparation, it has been great to have so much one-on-one time with Dr. Patel. It is a privilege to work in the lab with him and learn from him. It’s obvious that his main goal is to make his students stronger and better scientists before they have to move on,” said Medrano, who spends several hours each week in Patel’s laboratory. After attending graduate school, he would like to work for a pharmaceutical company or government lab.

Patel said, “This whole project was intended to be a learning experience. David has done a lot of work, research and experimenting with the instrument independently. I expect my students to function as scientists, and the independent laboratory work he has completed will go a long way toward his future studies. Being at Penn State Hazleton has afforded him opportunities that he likely would not have had otherwise.”

Patel is also presenting research of his own at the ACS meeting in San Diego, giving a talk on “Revisiting the potential for quinone-based diarylethene photochromes: A theoretical and experimental study on naphthoquinone diarylethenes for advanced organic materials.” His research, which he has been conducting for the last three years, focuses on making molecules that change shape and color using visible or infrared light instead of a higher-energy light, such as ultraviolet light. The molecules are similar to those used in transition lenses in glasses that darken in the sun, along with novelty T-shirts that change color when exposed to sunlight. Future applications could include usage in artificial muscles, targeted drug delivery and plastics that can conduct electricity. He has attended four ACS meetings, including the last three annual conferences. 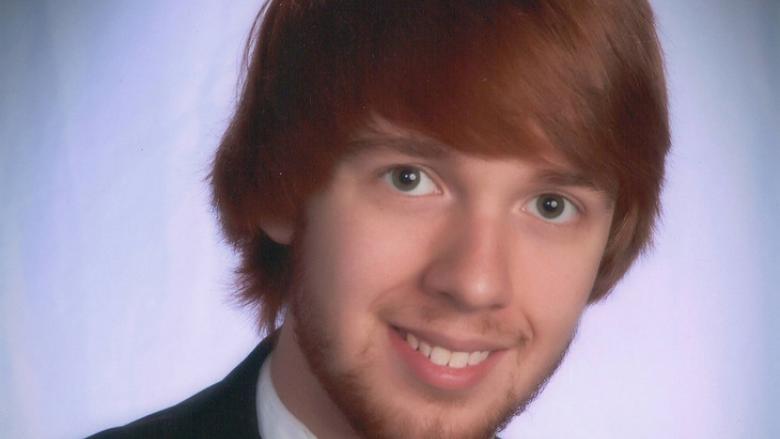