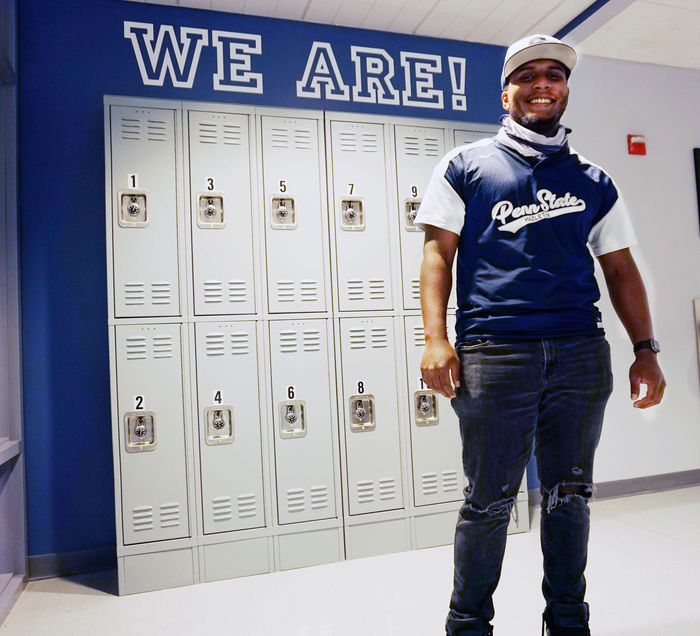 In addition to earning his bachelor’s degree in criminal justice, Vasquez is a resident assistant, a Lion Ambassador, and a member of the Student Government Association. He’s a catcher on the Penn State Hazleton Nittany Lion baseball team and plays intramural volleyball. He also works in the campus cafeteria.

As if all those responsibilities aren’t enough, he’s got something else in the works: becoming a U.S. citizen.

“That’s going to be the biggest step toward my personal and professional future,” he said.

Vasquez, a junior from Hazleton, hopes to one day work for the Pennsylvania State Police, but will need to pass his citizenship test before he can apply. He said he feels ready, thanks in part to the opportunities he’s had in America and at Penn State Hazleton.

“A lot of the things we have here, we didn’t have (in the Dominican Republic),” he said. “The opportunities are there. It’s a matter of taking advantage of them.”

“Penn State Hazleton prides itself on providing a close-knit campus experience by offering students several ways to make friends, meet friendly faculty and grow outside of the classroom,” Director of Student Services and Engagement Tracy Garnick said. “To see someone like Joan taking advantage of so many opportunities is a great example of getting the most out of the Penn State experience.”

For Vasquez, opportunity didn’t come without its share of setbacks.

He and his family had to overcome several challenges over the course of eight years before immigrating from the Dominican Republic, including a house fire that saw important paperwork burned to ashes.

Finally, in 2014, Vasquez, his mother and his three siblings arrived in New York City. Vasquez graduated from a high school in the Bronx before moving to Hazleton, where his father had lived since immigrating to the U.S. himself years earlier.

Vasquez grew fond of Hazleton right away, he recalled. Soon, he found himself driving past campus and decided to apply. It didn’t take him long to feel at home, he said.

“Penn State Hazleton as campus and Hazleton as a city are so welcoming,” he said. “I see all kinds of people on campus from all different backgrounds and it’s truly good to see everybody get along.”
He also credited faculty and his coaches for keeping him motivated.

“You get the professional side and the personal side of them,” he said. “They actually care and I really appreciate that.”

U.S. history isn’t one of Vasquez’s classes, but he’s studying it just the same.

Presidents, amendments, and principles of democracy are just a few of a possible 100 questions he could encounter on the naturalization test. To pass the civics portion of the test, he will need to answer 6 out of 10 questions correctly.

Vasquez said he hopes to get scheduled for the test in the next few months, but he’s already imagining what that moment of becoming a U.S. citizen might feel like.

“I’m going to be feeling really good about myself,” he said.

In the meantime, he’ll be staying busy and studying hard.

“My future depends on it,” he said.

Interesting in being the next Student Spotlight? Complete the spotlight application and let us know why your story should be featured. We'll get back to you if you are selected.