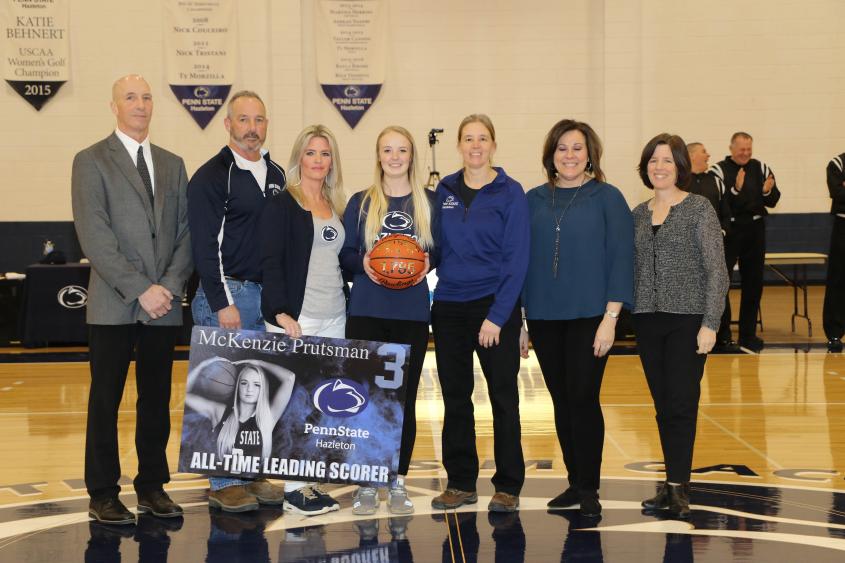 It seems like just yesterday that senior point guard Mckenzie Prutsman (Jasper, Ny.) was celebrating her 1,000th career point in uniform for Penn State Hazleton. In fact, that's not far from the truth. Just over year ago, that was the case when Prutsman knocked in a runner on her home court against Berkeley College of New York. Although one may not have predicted at the time, Prutsman would have more records to break in her senior campaign. On Saturday, February 9, that's exactly what transpired. Prutsman cemented herself as one of the all-time greats in Penn State Hazleton Athletics history when she notched her 1,785th career point to become the all-time leading scorer at the campus.

For some perspective, it took Prutsman 66 games to amass her first 1,000 scores ... no small feat in itself. However, in the 27 games following Prutsman's landmark score, the point guard averaged an astounding 28.5 points per outing, leaving the senior on the doorstep of breaking the scoring record set by Highacres Sports Hall of Fame member Alexis Daly (Wyalusing, Pa.). In the five games leading up to Saturday's game at Penn State Fayette, Prutsman tied a career high with 43 points against Penn State Lehigh Valley on January 30 and went on to score 30 or more points in five straight contests to get within six points of the record. it didn't take Prutsman long to make history in the first quarter at Fayette. Perhaps fittingly it came at the charity stripe, knocking in a pair free throws, a place where she has made a living for four years in uniform.

To Prutsman it may have been just another free throw, one of 423 made at the line to be exact, but in reality, it is the epitome of the hard work and determination that has been evident in both her academic and athletic careers. Prutsman will graduate later this year with not one but two degrees, a bachelor of science in rehabilitation and human services and a bachelor of science in psychology, and throughout her career has received honors by the Penn State University Athletic Conference and the United States Collegiate Athletic Association for her academics. For four straight years, the now senior will be named to the PSUAC's All-Academic Team and for the third consecutive year Prutsman will earn National All-Academic Team recognition by the USCCA, an award reserved for upperclassmen maintaining a 3.5 or higher grade point average. All of that while performing at an exceedingly high level on the basketball court.

By 2019, the senior has made her mark on the game and stands alone with 1,803 career points, a record that stands to grow with several games yet to play. As a point guard she has accumulated 364 rebounds, 338 assists and 330 steals while seeing 3,331 minutes of court time. Prutsman is a career 43.4 percent shooter from the field and a 75.1 percent shooter from the free throw line but perhaps most important to her, Prutsman helped her squad to earn back to back trips to the PSUAC Championship game and two berths in the USCAA National Tournament in 2016 and 2017.

Beyond just the numbers, Prutsman came into the league in 2015 and immediately made a name for herself, winning the respect and admiration of coaches and opponents around the state and the country. She was named the PSUAC's newcomer of the year for the 2015-16 season and been a constant on the PSUAC All-Conference list ever since. On the national level, she was named an honorable mention All-American as a freshman, a second-team All-American in year two, and last year elevated her game to be named a first-team All-American by the USCAA and Penn State Hazleton's female student-athlete of the year. Whatever accolades are in store for Prutsman in 2019 are yet to be written but regardless of titles, the senior is an ambassador for what can be achieved as a Penn State Hazleton student-athlete.