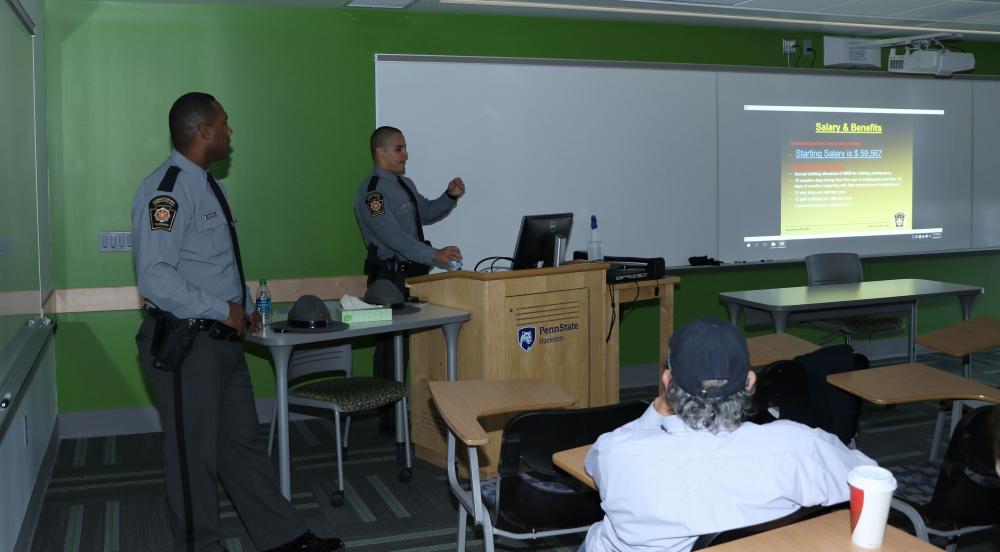 Troopers Marvin Armistead and David Myers gave an extensive overview of the state police, detailing the requirements and expectations that a student interested in being part of the force could expect.

“This is a way for the state police to get in front of students as a captive audience. We like to have employers speak to students and engage with them to share what they do,” said Kaitlyn Krasucki, career services counselor at Penn State Hazleton.

Armistead and Myers began by explaining their backgrounds and paths to their careers and then elaborated on the history of the Pennsylvania State Police (PSP), originally formed due to unrest during coal mining strikes in 1902. The original contingent of 228 men that covered 45,000 square miles has now increased to 4,300 men and women, with the first female applicant accepted in 1971.

The recruiters explained the meaning of the PSP patch that all officers wear, noting that the black represents coal and the red represents the blood shed by fallen troopers.

They gave comprehensive details on the state police force today, including demographics, vehicles, weapons, salary, benefits and more. They discussed job responsibilities and patrol functions in answer to a common question — “what do you do?” — sharing information about traffic enforcement, felony crimes investigation and roles and resources in the department.

“We like for you to know all the opportunities we offer, including the chance to get into one of 40-plus specialty positions. After three years on patrol, you can test and interview to be selected for a specialty position,” Myers said.

The recruiters told the students that all cadets undergo a thorough background investigation, advising them to careful in who they associate with and to consider the kind of credit history they are building.

At the conclusion of their presentation, Myers and Armistead showed a cadet training video that spotlighted the daily responsibilities of cadets at the state police academy in Hershey, including physical training and academic learning in the classroom.

“The cadet training is very demanding physically and mentally. It’s a lot of long days at the academy, often 14 or 16 hours,” Myers said, noting that there’s a 15 to 20 percent dropout rate at the academy, especially in the first few weeks.

Following their presentation, the troopers took questions from the class ranging from topics such as the PSP’s tattoo policy to the number of people who don’t pass the test to graduate from the academy.

“We want students to know that we’re here and we’re hiring. They don’t often get to see us in this light, where we’re much more calm and relaxed,” Armistead said. “We also want to let them know why it’s important to surround themselves with good people, listen to their parents and build a good credit history.”

Gutierrez said he appreciated having the pair speak to his class. “It’s important to have them here because they’re telling students the real stuff to expect that’s related to where they live, in addition to what the qualifications are and what they’re looking for in employees,” he said.