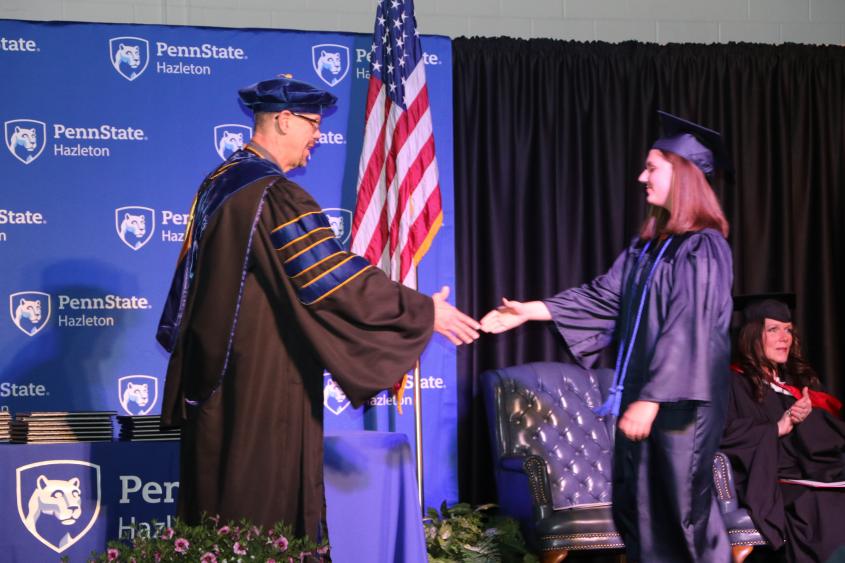 Director of Academic Affairs Elizabeth J. Wright presented the candidates to Chancellor Gary M. Lawler who conferred associate degrees and baccalaureate degrees to students completing programs of study at Penn State Hazleton and other Penn State locations who chose to participate in the graduation ceremony.

Amie Yenser, senior instructor in anatomy and physiology and president of the Penn State Hazleton Faculty Senate, served as the faculty marshal and led the academic processional.

Mary Veronica Sweeney, 1983 Penn State graduate, delivered the commencement address. Sweeney is the founder and director of Power City Arts, a social enterprise designed to empower young creative entrepreneurs at the intersection of traditional arts and new digital media. This summer, she will guide a class of Luzerne County Community College students to design a large mural dedicated to the idea of “The Hazleton Way,” a celebration of neighborliness as described by Chicago Cubs manager and Hazleton native Joe Maddon.

Sweeney graduated from Bishop Hafey High School and received an associate degree in letters, arts, and sciences from Penn State Hazleton. She furthered her studio training and certification in art education at the University of the Arts in Philadelphia. She earned a master of fine arts degree from the Pennsylvania Academy of the Fine Arts, the oldest art academy in the United States, and was the first woman in the school’s 194-year history to teach the renowned Thomas Eakins anatomy drawing curriculum in the original rotunda gallery.

She is dedicated to mentoring while maintaining a working studio. During a decade in Brooklyn, New York, her creative commissions included lectures and images both large and small for organizations such as PBS, Scholastic, The Interdependence Project, Random House, the Rubin Museum of Art and the Metropolitan Museum of Art. Her grants and awards include two Stobart Foundation grants, two Leeway Foundation grants and many arts residencies, including at the Vermont Studio Center and a Ballinglen Arts master class in County Mayo, Ireland. Sweeney’s prints, portraiture and landscapes are in numerous private and public collections. In 2006, she was invited to participate in the U.S. State Department Artsin-Embassies program. Sweeney’s work was featured in the 2006 traveling exhibition and book “Visions of the Susquehanna: 250 Years of Painting by American Masters.”

In 2015, Sweeney spent a year with movie director David Lynch as the next step toward visual storytelling and creative engagement with the world. She is editing her first documentary, “Whispering Infinity,” about the role of meditation in creativity, which includes conversations with actors Jim Carrey and Los Angeles painter Don Bachardy, among many others.

Sweeney teaches at the Cambridge Center for Adult Education in Boston, where she also earned a master of education degree in technology, innovation, and education from the Harvard Graduate School of Education.

Degrees, graduates and their hometowns

Bachelor of Science in Turfgrass Science from the College of Agriculture: Colby R. Petrilla, Sugarloaf.

- Bridget M. Baksa, a sophomore business major from Hazleton, received the honor for the full-time sophomore enrolled in a Penn State degree program.

- Katharine E. Ray, White Haven, who earned a bachelor of science degree in Rehabilitation and Human Service during the ceremony, was honored as the graduate earning the highest grade point average in a Penn State Hazleton baccalaureate degree program.

- Antonella Amato, South Abington Township, who earned an associate degree in Medical Laboratory Technology, was recognized for the highest grade-point average of a graduate in a Penn State Hazleton associate degree program.