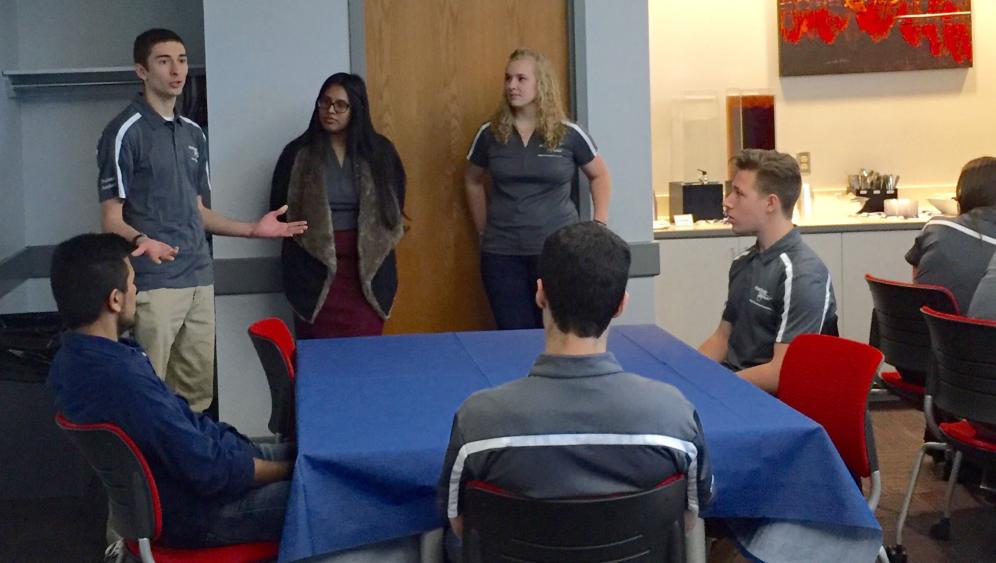 HAZLETON, Pa. — The 2016-17 academic year at Penn State Hazleton is underway with two female students at the helm of the Student Government Association (SGA). Dixie McCoy and Maria Magabo have been elected as the new SGA president and vice president, respectively, the first time in several years that the organization has been led by two women.

McCoy earned her associate degree in physical therapist assistant in May and is now turning her sights to a four-year letters, arts, and sciences degree at Penn State Hazleton. Magabo is a junior studying general engineering (alternative energy and power generation track) at the campus and is a tutor in the campus’ Math Dimension. McCoy, of Watsontown, is a graduate of Warrior Run High School. Magabo, of Hazleton, is a graduate of Hazleton Area High School.

As leaders of SGA, both women want to work together to increase student pride and involvement at Penn State Hazleton.

“I’m hoping we can reach out more to students and represent them more,” said McCoy, with Magabo adding, “Students don’t often see the change they want immediately. I think if they see the behind the scenes in our meetings, they’ll be really excited and more likely to step in and help.”

McCoy said the group also wants to work closely with local legislators on issues important to the Penn State Hazleton community, asking them to come to campus and speak to students.

All of their action items have one goal: making Penn State Hazleton even better.

Both students became involved in SGA through friends and were elected to their positions at the end of the spring semester. They are both familiar with the workings of the organization: upon joining SGA, McCoy went right into her role as chair of the Student Affairs Committee, while Magabo has served as vice president, secretary and chair of the Academic Affairs Committee.

As chair of the Student Affairs Committee, McCoy became accustomed to keeping her ear to the ground and staying attuned to what’s happening on campus, noting that she knows many students personally thanks to the small campus setting of Penn State Hazleton.

“I feel as if I can connect to people well, especially since I’ve tended to meet a lot of people through my program and activities on campus. I try to talk to everyone I know or can think of. I also talk to SGA senators or committee members to see if they know of anyone who has an issue that may need attention,” McCoy said.

Magabo said that after joining SGA and becoming chair of the academic affairs committee, she appreciated having insight into how faculty members operate individually and together. As vice president, she wants to continue developing and supporting relationships with faculty.

“One of my goals is to work closely with Faculty Senate. I really want to foster those connections since SGA is a liaison between faculty and students. With regard to students, I like to listen to other people’s opinions and I like to help them in any way I can,” she said.

“We really want to continue to make the campus enjoyable for future students and to work to help it grow,” McCoy said.

The pair have diverse skills that complement one another.

“Dixie is a people person who knows everyone on campus and what’s going on with student life. Where I bring the procedural sense of how to go about things, she knows people and how to help them. She knows this campus and has an honest love for it,” Magabo said.

McCoy added, “Mari is very open and easy to talk to and a great person for students to go to with concerns. She is also organized, academic and involved on campus.”

They credited Penn State Hazleton’s small-school environment for providing them with opportunities for leadership and close relationships with faculty and staff.

“It’s nice to know pretty much everyone and be able to relate to a variety of people. The faculty and staff are so approachable and knowledgeable,” McCoy said. “I don’t know that we would have been able to be so involved, especially in leadership roles, at a larger school.”

“I probably never would have met Dixie, since we’re in totally different programs and fields of study,” Magado added.

Director of Student Services and Engagement Tracy Garnick said, “Having already spent time as committee heads with SGA, Dixie and Mari are well versed in student government leadership. Their prior experience pairs well with their skills and ability, which will be an asset for current Penn State Hazleton students as well as those to come.”

McCoy and Magabo encourage any interested students to join the organization. Applications are available during Wednesday’s club fair from 11:30 a.m. to 1:30 p.m. on the campus mall, or in the student affairs office through Sept. 9. All applications are due by Sept. 9, and students will be informed the following week if they have been selected as SGA senators.