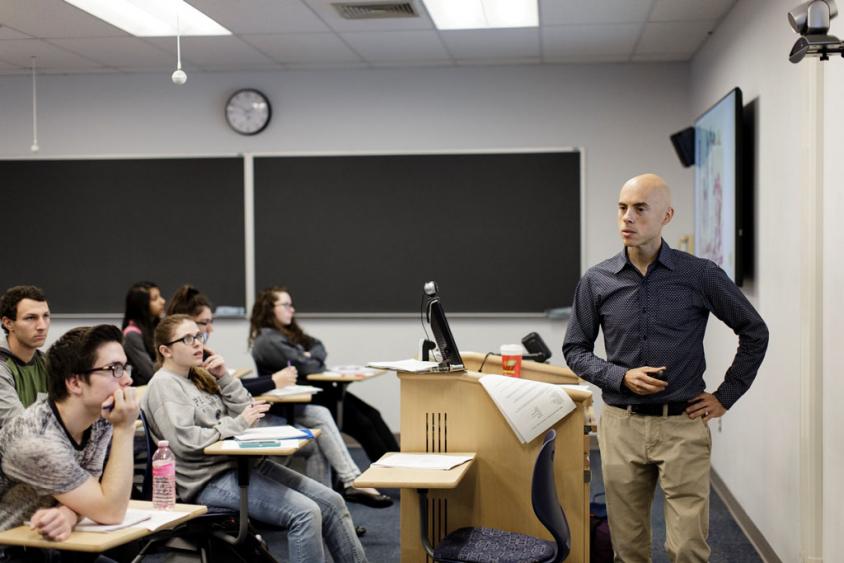 Penn State Reads is the University’s program implemented to provide a shared experience among new students, encourage intellectual engagement within and beyond the classroom, stimulate critical thinking, and foster a deeper connection to Penn State's mission and core values. All students, faculty and staff are encouraged to read the book and participate in the related planned events.

First-year students are asked to read the book before coming to campus for the fall semester. Throughout the year, they have an opportunity to participate in class conversations and engage with other first-year students in discussions about the concepts introduced in the book.

As part of his First Year Engagement (FYE) class at Penn State Hazleton, Justin Nordstrom, associate professor of history, led his students through a discussion of "The Boom." He asked his students to prepare questions about the book, and the class voted on which one to ask Gold. Nordstrom contacted Gold to explain the class discussion and to ask him the winning question: “What is the future of energy, specifically?”

In his response, recorded specifically for Nordstrom’s class, Gold shared his insights and thoughts on the question. As part of his response, he said, “I think that what the future is going to hold is greater reliance on electricity, specifically for transportation … Natural gas and renewables will be the two great pillars, and coal and nuclear energy will continue to play smaller roles. When it comes to energy, what everyone wants is for it to be affordable and available. We also now want it to be clean, so I think energy will be increasingly supplied by wind, solar power, natural gas, dams and other forms of renewable energy.”

Gold is an award-winning journalist at The Wall Street Journal. He covers energy news topics and is a part of a Wall Street Journal investigative team. Gold has reported on the Deepwater Horizon explosion and oil spill, and his team’s coverage was a finalist in 2010 for the Pulitzer Prize for national reporting. In addition, Gold’s “The Boom” was long listed for the Financial Times (FT) McKinsey Business Book of the Year Award. Gold spoke last semester at Penn State University Park.

In “The Boom,” Gold examines fracking, the process of drilling into the earth in order to extract oil and natural gas. The book studies this industry closely and documents the rise of environmental oil field technology and its effect on rural communities.