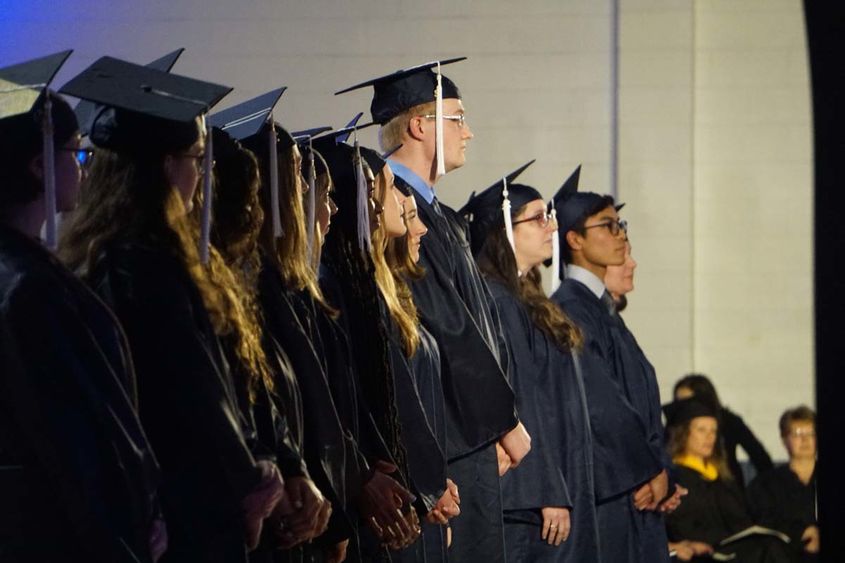 HAZLETON, Pa. — Penn State Hazleton conferred degrees to its Class of 2022 during its 52nd annual commencement ceremony on Friday, May 6.

Joined by their families, friends, and members of the faculty and staff, graduates gathered in the Dr. Thomas M. Caccese Gymnasium to walk across the stage and receive their degrees.

Chancellor Gary M. Lawler, who will retire on June 30 after 15 years as chancellor and more than 40 years in higher education overall, served as the ceremony’s guest speaker. He encouraged graduates to be proud of themselves for all that they have accomplished over the course of their Penn State Hazleton experiences.

“This is a very important day that you will reflect on time and time again for the rest of your life,” Lawler said. “It is a milestone moment not only for you, but also your proud family members. It marks the beginning of the journey which will be the rest of your life.”

In addition to recognizing the Class of 2022, the ceremony also welcomed back members of the Class of 2020, whose commencement celebration was held virtually due to the pandemic.

In his remarks, Lawler applauded the determination and resiliency both classes of graduates showed throughout a college journey that saw various obstacles due to COVID-19.

“The challenges just kept coming and you responded to each and every one of them,” he said. “You did it not because you were asked, but because deep down you knew it was the right thing to do, and that is what we do at Penn State.”

A total of 106 degrees were conferred; 23 associate degrees and 76 baccalaureate degrees. Seven students were dual majors.

Class of 2022 graduates and their degrees conferred were:

Alyssa L. Brown, Northumberland, who earned an associate degree in medical laboratory technology, was recognized for the highest grade-point average of a graduate in a Penn State Hazleton associate degree program.

Clayton Josiah Kimsal, White Haven, who earned a bachelor of science degree in engineering, was honored as the graduate earning the highest grade-point average in a Penn State Hazleton baccalaureate degree program.