HAZLETON, Pa. — Through her experiences with the Hazleton and Happy Valley LaunchBoxes and other Invent Penn State resources, Krista Schneider received the guidance to grow a gardening hobby into a successful startup.

Less than two years since the inspiration first came to her during a Hazleton LaunchBox event, Schneider’s Shared Roots — biodegradable “garden squares” used to grow vegetables, herbs and flowers — is in the beta testing phase, with customers throughout the country using the product and providing critical feedback.

Along the way, Schneider said she bolstered her business model through a variety of no-cost resources offered through Penn State, including market testing, intellectual property advice, and feedback from advisers, industry experts and experienced entrepreneurs.

“As I went through the various programs, my eyes were opened to all the resources available through Penn State that I never would’ve known about,” said Schneider, who holds a bachelor’s degree in landscape architecture from Penn State. 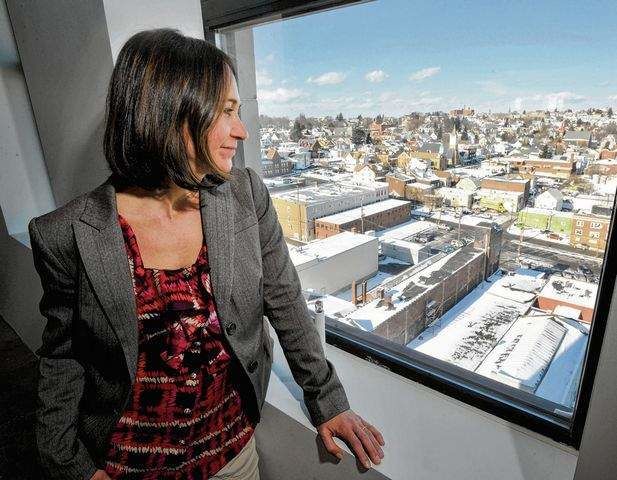 Krista Schneider, founder of Shared Roots and executive director of the Downtown Hazleton Alliance for Progress.

Her startup, Shared Roots, upcycles spent grain from the Berwick Brewing Company in Berwick into pre-seeded, ready-to-be-planted squares. Customers can choose between single squares pre-seeded with carrots or beets, for example, or 16-square "garden in a box” sets with themes like “Superfood Box” or “Salad Box.”

Each square is hand-crafted and made from recycled paper. As they decompose, they feed the soil with vital nutrients while fending off weeds and harmful pests.

Schneider, who serves on the Hazleton LaunchBox’s steering committee, got the idea for what would eventually become Shared Roots came during its inaugural Teen Entrepreneurship Challenge in 2019, when a student pitched a product that incorporated recycling plastic containers, she said.

“From there the seed was planted, so to speak,” she said.

Schneider, an avid gardener, was intrigued by the concept of recycling waste and eventually decided to focus on spent grain.

When the COVID-19 crisis came along, it gave Schneider an opportunity to revisit the idea and develop the product, including fine-tuning the design in her basement and experimenting in her garden, she said.

But it wasn’t until an opportunity came along late last year that the idea really took off, she said.

“We were happy to help Krista kick off her discovery process,” Andahazy said. “The reason we’re here in Hazleton is to see sustainable ideas and businesses like these come to life.”

Hazleton LaunchBox Entrepreneurship Facilitator Fermin Diaz added, “Shared Roots fit all the criteria of next-generation innovation. When waste can be converted into something people can use, it benefits the environment and the economy.”

Shared Roots was one of seven early-stage startups from across the commonwealth to graduate from the FastTrack Accelerator program in April.

During the 15-week program, Schneider and other participants met virtually to learn how to avoid costly startup mistakes, build a business plan and test the market. Each team received one-on-one mentoring, access to up to $3,000 in customer discovery funding, and numerous other resources.

The Happy Valley LaunchBox’s free Penn State Law Intellectual Property Clinic (IP Clinic) helped Schneider file a provisional patent for the "garden squares” and performed a search to determine whether the product was infringing on any existing patents.

Through the ENtern entrepreneurship program, Schneider was paired with an intern that helped her perform research. The program was created through a partnership between the Penn State College of Engineering’s engineering entrepreneurship program and the Happy Valley LaunchBox, and is open to startups participating in the LaunchBox’s FastTrack Accelerator or Summer Founders programs.

Additionally, through the College of Engineering’s spring Learning Factory Capstone Design Project Showcase, Schneider sponsored a team of six seniors that developed a machine for how her product could be produced more efficiently. The team won third place for Best Project and first place for Best Poster.

Following her experiences with the FastTrack Accelerator, Schneider competed in a business competition hosted by tecBridge, an organization which supports entrepreneurship and innovation in northeastern Pennsylvania, and won $10,000 for finishing first place in the competition’s non-collegiate division.

Schneider said the value of her experiences was receiving the structure she needed to move forward with an idea.

"To launch a successful startup, I learned this is the amount of work that needs to go into it,” Schneider said. “It’s easy to throw something out there and spend a lot of money up front without much of a plan, but this program taught me to do it thoughtfully and efficiently.”

“Krista took advantage of the opportunities to learn,” Andahazy said. “She talked to customers, dedicated time and effort to these programs, and was able to refine her idea into a sustainable business. It’s been rewarding to see Shared Roots not only take shape, but snowball into what it is today."

Schneider said she plans to keep improving the product from the research end and has begun discussions with faculty and researchers in the Penn State's College of Agricultural Sciences, while working toward selling it more broadly.

She continues to conduct her own customer feedback and field testing at Butler Township Community Garden, a space she founded in 2009 which provides hands-on learning opportunities to young people interested in organic farming, gardening, and community-supported agriculture. She is also working on a demonstration area in Berwick Brewing Company’s beer garden to broaden exposure.

"I don’t even consider it work, really,” she said. “It’s a fun passion project. If it works out, great. If it doesn’t, I learned a lot along the way.”