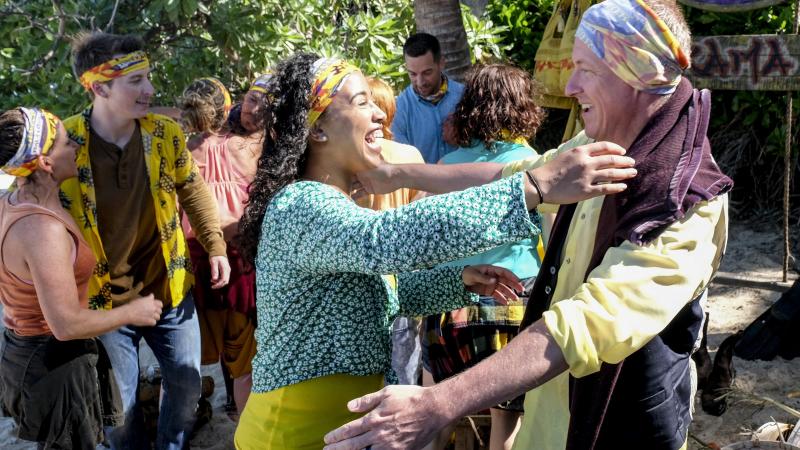 From Penn State Hazleton to Survivor

From the mountains of northeastern Pennsylvania to the islands of Fiji in the South Pacific, Julia Carter’s life experience includes stints in both – as a student at Penn State Hazleton and, most recently, a competitor on the CBS hit series Survivor.

From the mountains of northeastern Pennsylvania to the islands of Fiji in the South Pacific, Julia Carter’s life experience includes stints in both – as a student at Penn State Hazleton and, most recently, a competitor on the CBS hit series Survivor.

“I was working full-time but was planning to resign in May anyway because a lot of my mentors told me to really enjoy the summer before starting medical school, so I planned to travel and experience the world during that summer,” she said.

Her opportunity for travel and experience came about two years after she first applied online and sent a video to CBS. She later attended a Survivor open casting call in Wilkes-Barre to “double up my chances” and got a call in April with an invitation to join the cast.

For Carter, it was a chance to be part of the show she’s watched each season from the time it premiered when she was about 7. Although it’s a long way off from where she grew up in Greater Hazleton, she felt she was up to the challenge.

“From the time it started, it became part of my weekly routine. I’ve definitely been a fan for the long haul,” she said.

“Watching since I was younger meant you see these people compete and what they go through. It seems so far out of reach, but you’re entertained by it,” Carter said. “As I got older, watching the show I began to realize these aren’t just characters. They’re human beings going through social and emotional challenges in pursuit of a million dollars. I began to wonder if I could take the skills I’ve developed and learned from life and see how I could do on the show.”

After hearing she was selected as a cast member, “I had a mental breakdown and a freakout moment” at first, she revealed. She spent time watching previous seasons, especially more recent seasons, “to really analyze the game play and see what personalities aligned with mine and strategies I could use.”

Carter didn’t prepare as much physically – aside from doing more swimming in preparation for open water challenges – but instead focused on “trying to prepare myself for a really emotional and mental challenge.”

“With the physical game, I’ll only be able to push myself as far as I can. But emotionally and mentally, that’s where a player could really fall, especially if they get in their own head. So I tried to build my emotional experience and get in tune with where I was going,” she said.

Carter said she was “a bit intimidated” by the setting, which was why she focused on building her mental strength and resilience. “I’d never been in a secluded area on my own with limited resources, dealing with storms, no food and more. I’ve seen people on the show not be able to bear the elements and leave and quit. Unless you quit, you have to bear those elements. And I don’t quit so I told myself, ‘Julia, you had better get ready for this,’” she said.

Survivor wasn’t Carter’s first experience with foreign travel – she went on study abroad trips to Costa Rica and Belize as part of independent study courses at Penn State Hazleton led by Eileen Morgan, assistant teaching professor of English. During the courses, students learned about the countries’ history, ecology, economy, educational system, culture and more and were able to conduct research about any further topics of interest.

“Julia was an excellent student. She was motivated and very engaged and helped her peers with Spanish translation for on-site local interviews,” Morgan said. “I think she will do well with anything that requires problem solving, innovation, team work and grit. She showed all of that while we traveled in Central America,” Morgan said.

Carter attended Penn State Hazleton for two years before transitioning to University Park to complete her degree in biology and minor in Spanish. She currently lives in Newark, N.J., and is a first-year medical student at Rutgers New Jersey Medical School.

She commuted from home and said the campus provided a “major benefit” to her being able to stay home, work and save money for those two years.

“I loved that I was able to be home, stay local and still be in the community I grew up in while still working toward my degree. I also liked how community-based Penn State Hazleton was with smaller classes and more individual attention. It was really beneficial for me to start there,” Carter said.

After earning her master of public health degree from the University of Pittsburgh, she worked as a medical assistant at a dermatology practice while living in Washington, D.C., before starting medical school. She is still deciding on her specialty and has an interest in cardiology driven by her father’s death from heart disease when she was 7.

Carter was drawn to medicine as a way to practice her social skills, an asset that she believed would serve her well on Survivor.

“I’m very open-minded as far as what I want to do career-wise. I want to see patients and use my social skills to be part of a community. I would like to teach as well, so I’m also considering academic medicine,” she said.

“I work well with other people and I’m a team player. I do have leadership skills and am able to be a good leader, but I’m also able to be a listener and a follower when need be,” she said.

For her strategy on Survivor, Carter wanted to be herself and use the skills she already has.

“I wanted to remain true to myself and be genuine. That’s my strength and I’m going into a very person-based career where I see the importance of relationships you form. It can be applicable in the game and fits my personality to use the skills I know are true to me and that I use in my daily life,” she said.

She encouraged those who might be thinking about how they would do on Survivor to apply.

“If you want to do anything in life, just go for it. You never know what could happen. The unexpected could come your way when you least expect it. Reach for the stars and follow your dreams,” she said.

Carter will watch the Wednesday night premiere with a party in Jersey City with her friends, family and any Survivor fans who want to stop by and see the show.