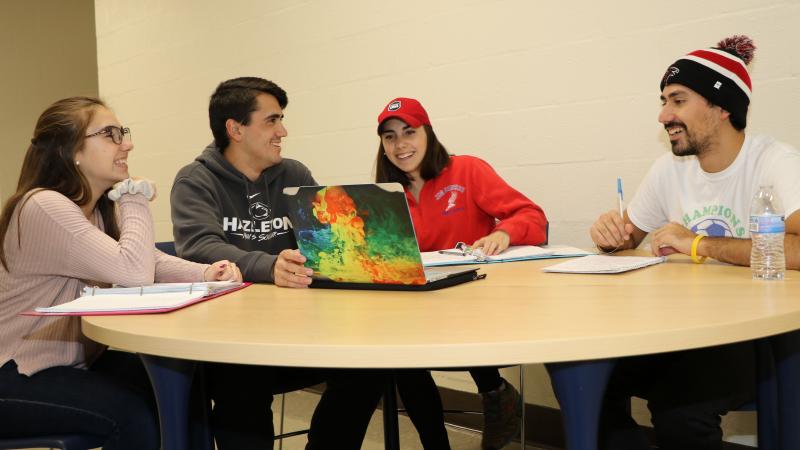 “Principe” is a familiar last name to many faculty members and those involved with athletics on campus. That’s because four members of the Principe family – Michael, Stephen, Meghann and Camille – are all students at Penn State Hazleton this semester.
Two brothers, two sisters all studying at Penn State Hazleton

“Principe” is a familiar last name to many faculty members and those involved with athletics on campus.

That’s because four members of the Principe family – Michael, Stephen, Meghann and Camille – are all students at Penn State Hazleton this semester.

Michael is in his last semester studying letters, arts and sciences and Stephen is a senior majoring in engineering (alternative energy and power generation track). Meghann, a sophomore, and Camille, a first-year student, are still considering their major options.

“We liked it and talked about it so much that Meghann and Camille applied and ended up coming here, too,” Michael said.

Camille said, “It's close to home and it’s a lot cheaper than somewhere else, plus I really wanted to play soccer. I really wasn’t thinking about going anywhere else.”

Meghann said, “We had met with the soccer coach last year who was coaching both the men’s and women’s teams and we really liked him.” All four have played soccer since elementary school and play on the soccer teams for Penn State Hazleton, with Meghann on the women’s team the first year it started. Michael and Stephen said playing on the team together is among their favorite memories from Penn State Hazleton.

Their brothers’ close relationships with their soccer teammates on the men’s and women’s teams led to built-in friend groups for Meghann and Camille when they started.

“I already knew most of the people I’m friends with now. They’d always have their friends from soccer over, so I knew everyone from last year,” Camille said.

Meghann said, “Coming in with two older brothers on the team right when the women’s team started helped both teams come together. In a way the whole team became like older brothers to us.”

For some who don’t know them well and find out the four are siblings, it’s often a reaction of “‘I had no idea you were related! So that’s why you all hang out together!’” Michael said.

The family lives in Lake Harmony and the four siblings commute together, which means coordinating schedules as best as they can, although long breaks are often part of the deal. Even on days Michael doesn’t have class until 1:30 p.m., he has to come in with the others for Stephen’s 8 a.m. class. Last semester, Meghann had just one class – at 8 a.m. – two days a week, but her brother had class until 8 p.m.

They use the time to study, spend time with friends, play soccer during the season, or in Stephen’s case, lifeguard at the campus pool.

“It’s not too much of an inconvenience. We just hang out or get homework done. During the season, we’re here until almost 8 at night because of soccer. Our family just has one extra car, so this is how we have to do it,” Michael said.

Michael drives in the morning and Stephen at night, although with this being Michael’s last semester before he graduates and heads to law school, the driving arrangement will have to change.

“There will be more room in the car,” Meghann said, with Camille adding, “And more space for bags. I’ll get the backseat to myself!”

They said their parents, Nancy and Michael Sr., like the idea of them going to school and traveling together.

Michael Sr. said, “Michael and Stephen originally went to Penn State Hazleton to play soccer and because it was affordable. They stayed because they made so many good friends and they enjoyed the academics there. They love the small campus feel and their professors have been very supportive of them. We sort of steered the girls that way as well, since they both played soccer and we respected the academics they could choose from.”

“I think the small nature of the campus made it so that the kids were really comfortable there. They got a chance to be taught by professors with Ph.D.s, but in a more intimate setting. That has really helped the kids feel comfortable in college. And they have met so many nice kids from playing soccer who have become great friends,” Michael Sr. said.

In addition to soccer, the four Principes are involved with Penn State Hazleton THON, all as members and Meghann serving this year as public relations and marketing captain.

“Some of our friends told us about it and we decided to go to a meeting,” Michael said. “We went to THON and it blew us away. We love being involved.”

Director of Admission and Financial Aid Allen Koehler said, “The Principe family illustrates that Penn State Hazleton is ideal for students who want to get involved on campus. Whether that's through the athletic program, our 25-plus clubs and organizations, or having a job during downtime, there’s always something to do when a student is not in class. The students who get involved, like the Principes, are the students who truly thrive at Penn State Hazleton.”

Spending so much time together has brought the Principe siblings closer. They’re familiar with each other’s class and meeting schedules. Michael has two classes with Meghann and has had classes with Stephen as well. Michael and Megan both work at Split Rock Resort’s H20ooohh! indoor waterpark – Michael as a supervisor and Meghann as a lifeguard – and sometimes drive to work together. (Stephen works as a supervisor at Kalahari Resort, while Camille works at Nick’s Lake House as a server.)

Michael Sr. relayed that when people hear about their family having four students in college at the same time, “they all take a deep breath because they know what that costs.” But, he added: “They all choose to stay at Penn State Hazleton despite the fact they could go for free where I teach. We’ve been incredibly happy with it. They’ve done well academically and Penn State Hazleton has prepared them well, especially Michael, who’s ready for law school. They have memories of a small campus with caring faculty and nice kids. Even though it’s been challenging financially, it’s worth it.”

Director of Development Eileen Kuperavage said, “Penn State is committed to making higher education accessible and affordable for all families, which is particularly important for families such as the Principes with multiple students pursuing a Penn State education at the same time. Scholarships are one way we can reduce the cost of a Penn State degree and the debt students may incur in earning it. Private donations continue to be necessary and appreciated to make the benefits of a Penn State education available for everyone.”

Michael Sr. said, “We’re really proud of our children and we really enjoy and appreciate what Penn State has done for them at the Hazleton campus. It’s been phenomenal.”

After the four older Principes have graduated and moved on, the Principe name, like the names of other legacy families, may be heard again on campus in a few years: they also have a younger sister, Bella, who’s 10 years old.