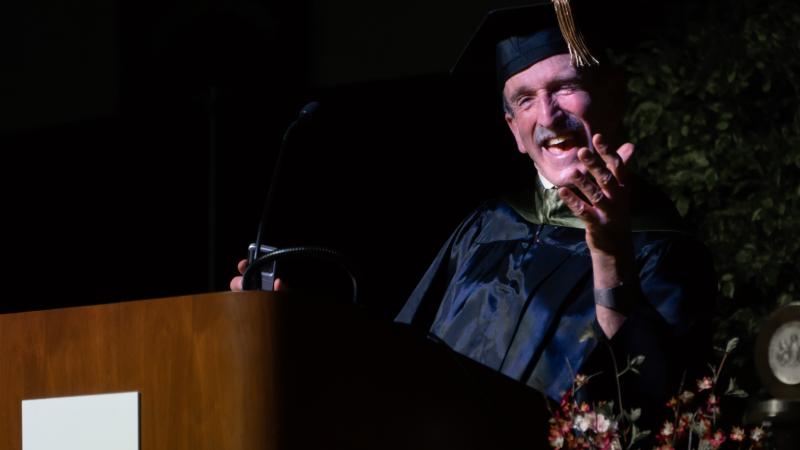 Imagine Penn State Hazleton when the Kostos building was new, Graham and Butler didn’t exist, and construction on the gym was just about to start. That’s what the campus was like when Assistant Professor of Biology Carl Frankel arrived in 1974. And now, after Frankel’s 44 years at the campus, he has said his goodbyes as he moves on to retirement.
Assistant Professor of Biology Carl Frankel retires after long career at campus

Imagine Penn State Hazleton when the Kostos building was new, Graham and Butler didn’t exist, and construction on the gym was just about to start.

That’s what the campus was like when Assistant Professor of Biology Carl Frankel arrived in 1974.

“Without a doubt, the people at this campus have been what I enjoyed the most, both my students and the others who work on campus. I will really miss the people and that camaraderie,” he said.

He reflected on the changes four and a half decades have brought to the campus, saying, “The digital electronic revolution, with the march of technology into the classroom and the hands of students, has been a big change. And the physical growth of the campus has also been pretty stunning. The gym was built shortly after I arrived, and the bookstore, Graham, Butler, North and West halls were all added. The dining hall got an addition and was greatly expanded, and just recently, Kostos was renovated.”

In addition to all the physical and technological changes that have occurred during Frankel’s 44 years at the campus, the student body has changed significantly as well.

“The increasing diversity of our student body and the campus in general has been very gratifying. It has been very enjoyable to me to have people from different backgrounds and I think it really adds to the specialness of the place,” he said.

Throughout his time at the campus, Frankel taught courses in biology; genetics; physiology; biochemistry; biological sciences; science, technology, and society; and more, including one-time courses on special topics. He developed laboratories for a variety of science courses and team taught courses with Assistant Professor of Biology David Orbin, also retired, and Associate Professor of Biology Christopher Goguen. He has also supervised more than 100 students in research projects of many kinds.

“When I came for my interview and saw where I was, I think everything else was a blur,” Frankel remembered, laughing. “I couldn’t believe that I could walk out of my office and into the woods in three minutes. I thought, ‘I get to work here? Pinch me!’ And I still feel that way,” he said.

He quickly fell in love with not just the scenery, but also what he describes as the “intimacy” of a smaller campus and the students who attend Penn State Hazleton. He especially spoke highly of the character of his students, saying, “I always had such a good feeling about the kinds of people we have as students here, having seen for myself their integrity and sense of honor.”

Frankel committed himself to lifelong learning in both his chosen fields of biology and genetics, and also the broader scientific community.

“I always try to keep up to date with my subject matter. I read science a lot and I feel my duty is to know what’s going on in science very broadly. I study topics such as astronomy and archaeology, both for my own interest and as a way of engaging my students,” he said.

His style focuses on engaging with students both inside and outside the classroom.

“To me, teaching is all about the subject matter and the relationship between the student and the teacher, and I’m always trying to have that good relationship with my students,” Frankel said. “I want to be accessible and I want to be somebody they can trust, enjoy spending time with and feel comfortable with. I work at creating that type of relationship,” he said. “When you can talk in a relaxed way, students feel comfortable to talk about school and personal problems.”

“If we could be like a learning community where we all just contribute our bit, teaching and learning together, talking about a subject that we like in a way that’s fun and exciting and as unstressful as possible, that’s the atmosphere I’m always trying to create. That’s what makes me happy,” he said.

Nearly 40 years later, Frankel’s teaching style remains memorable to Scott Semmel, who registered for a class with him based on his roommate’s recommendation.

“I remember him coming back from class and talking about this different perspective of teaching Dr. Frankel had,” he said. “When I took his class, I found he had a different approach in terms of how he talked to students and how he interacted with them. His class was challenging but I liked his approach. He respected us and cared about what we thought. I could tell he wanted to make the class interesting. It wasn’t just lecture but more hands on, engaging us and forcing us to see things from another perspective.”

When Semmel’s daughter, Jenna, took a course with Dr. Frankel at Penn State Hazleton in 2016, Semmel was surprised to hear that familiar name.

“When she mentioned she was taking a class with Dr. Frankel, I thought, ‘There’s no way it can be the same guy I had,’” he said. “But when she was describing to me how he was in the classroom, I knew it had to be the same guy. It’s not very common for two generations to have the same teacher, so that speaks to his love of education and students.”

The Semmels are one example of Frankel’s legacy spanning generations. Beth Mussoline and her daughter, Aleigha Sokolowski, are another.

“I was an English major and I did not like science at all, but I really enjoyed Dr. Frankel’s class. It brought out an awareness of science for me that I didn’t think was there. He was so compassionate and so student-driven and just made class fun and interesting,” Mussoline said. “As soon as my daughter said she had him, I told her, ‘You’re going to have such a good time in that class.’”

Sokolowski found her mother’s experience with the long-serving professor to still be the case years later.

“Not only did he make the class fun, but I really liked how he was with his students. He was really caring toward everyone. He could tell if a student was having a bad day or needed help in the class and would ask what he could do,” she said.

“I enjoyed class with him. He made it easy to understand, especially for those not geared toward science-based majors,” Sokolowski said.

Mark Butler, who was a student at the campus when Frankel joined the faculty and later served on the Hazleton Alumni Constituent Society, said the campus community always had positive things to say about Frankel.

“I didn’t have him for a class, but I knew him in reputation and through my work on the society. I always found him to be a terrific person who had a pleasant and helpful manner about him. Students always spoke very highly of his teaching as well,” he said.

Frankel enjoys working with students of all ages, including youngsters. He developed the idea for a summer camp to teach children more about nature and the world around them. Critter Camp has taken off to be one of the most popular youth camps at Penn State Hazleton.

“I love their enthusiasm and how everything delights them. Of course they learn stuff, but it’s also fun. I want them to take that fun with nature away with them and keep it in their lives.”

On campus, he is well known for his support of students outside of the classroom, attending students’ games and concerts; serving as an adviser to groups including the Discussion Club, Biology and Outdoors Club and Allies; directing plays and just being someone students could talk to.

“I arrived here as an out-of-the-closet gay person in 1974 – before that was as socially accepted as it is today. I'm very happy at how cool Penn State in general and this campus and community in particular were and still are with that. And I'm proud of having helped many gay students deal with their own struggle, both by being a role model and in several cases by personally counseling them,” Frankel said.

That ability to form bonds with his students means it’s not uncommon for him to hear from a student years later, including one who recently got in touch just to say, “You might not remember me, but I became a biology teacher.”

He keeps in touch with some former students who have become “lifelong friends,” including a former World Campus student, now a retired teacher, with whom he has exchanged letters for years. He hopes to meet her and visit her farm during his retirement.

Frankel said he has always enjoyed being busy and the feeling of getting a lot done on a busy day. He also devoted himself to six community organizations, which will now get more of his time in his retirement.

He serves as co-president of the Hazleton Art League, a group he has volunteered with for about 30 years. He developed the league’s Art Youth Expo, which gives local youth the opportunity to display their talents, have an audience for their performances and win prizes. The event marked its eighth year this spring.

Frankel is a board member for Greater Hazleton Rails to Trails, Friends of the Nescopeck, Beth Israel Temple, the Greater Hazleton Concert Series and the Carbon County Environmental Education Center. He also supports the Downtown Hazleton Alliance for Progress, mainly through activities of the art league.

“The downtown revitalization is exciting and a great cause, bringing the white and Latino communities together. These are wonderful people who are hardworking, talented and idealistic and they’re passionate about building a good community here. I’m happy to get up in the morning and go out and say, ‘I work for this cause. This is something I believe in.’”

The organizations to which he devotes his time center on his passions for the outdoors, sustainability, art and recreation.

“I love art and have always regretted I didn’t have any talent,” Frankel joked. “But I bring pleasure to my life by surrounding myself with creative people and their work.”